The Rt. Honourable Speaker of ECOWAS Parliament, Dr. Sidie Mohamed Tunis has urged Parliaments across the globe to intensify actions meant to mitigate the dangers of climate change. Speaker Tunis took this stance in his address at the 144th Inter-Parliamentary Union (IPU) Assembly which holds from 20-24 March 2022 in Nusa Dua, Bali, Indonesia. He led a 3-man parliamentary delegation that includes Hon. Edwin Melvin Snowe Jr. and Hon Caramo Carama, as well as some management level staff to the 144th IPU Assembly, being hosted by the Parliament of Indonesia, where hundreds of parliamentarians from all over the world are meeting in person, to dialogue on the theme, ‘Getting to zero: Mobilizing parliaments to act on climate change’.

Speaker Tunis noted that, the world is experiencing rapidly rising temperatures in the summer, harshness of the winters, droughts shriveling up vegetations, among numerous disasters. He also indicated that, “Climate change is an unavoidable change that is devastating our planet and a threat to the existence of life on earth. The call for action was resonant all over the world and to some degree, successes were recorded in slowing down the degradation of our planet. However, it is now time to mobilize communities, nations, and regions”.

To mitigate the dangers of climate change, he enjoined Members of Parliament to place more emphasis on the environment, through the various interventions they engage in for the benefit of their countries and constituencies. Furthermore, he argued for the mainstreaming of climate change into all national budgets, emphasizing that these budgets should incorporate this phenomenon during the planning process. He stated that to strengthen these efforts, there should be national policies on climate change.

Speaker Tunis posited that consequently, Members of Parliament should be provided with adequate knowledge on adaptation and mitigation measures that will facilitate parliamentary interventions against climate change. He revealed that, the ECOWAS Parliament’s Committee on Agriculture, Environment has made giant strides by recommending that substantial budgetary allocations are made, and climate change issues are mainstreamed and adapted into national budgets of Member States.

Similarly, Hon. Edwin Melvin Snowe Jr., Chairman of Parliament’s Committee on Political Affairs, Peace, Security and African Peer Review Mechanism, also presented a paper to IPU’s standing Committee on Peace and International Security, on “Rethinking & Reframing the Approach to Peace Processes with a view to fostering lasting Peace”. In his address, he assured participants that, ECOWAS is already taking steps towards rethinking and reframing the approach to peace processes as an active reaction to the emerging political upheavals in the subregion.

Additionally, the Secretary General of the ECOWAS Parliament, Mr John Azumah, who addressed IPU’s Association of Secretaries General of Parliament (ASGP), enlightened the forum on the proposed elections by universal suffrage of Members into the ECOWAS Parliament.  He clarified that this key agenda of the 5th Legislature, is aimed at ensuring that the people of the West African region are given the opportunity to participate fully, as should be in any representative democracy, in the decision on who represents them in the pursuit of the region’s developmental and integration aspirations.

At the five-day IPU Assembly, Members will consider what parliamentary actions need to be taken to mitigate the effects of the global climate emergency and to implement the Paris agreement which main thrust is to limit global warming to 1.5 – 2 degrees Celsius. Parliamentarians will ponder questions such as – How can parliaments use the COVID-19 recovery period to accelerate the green transition? How can parliaments ensure that the needs of the most at-risk members of the population, including women and youth, are addressed as part of climate action? Also, parliamentarians will hear testimonials from climate activists and representatives from countries on the frontlines of climate change, particularly small island developing states. 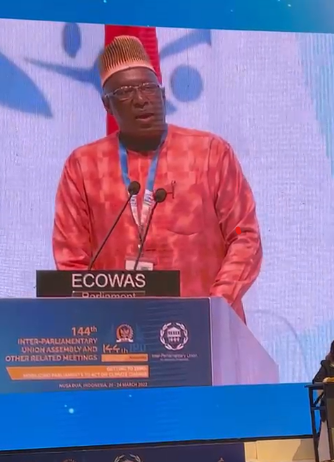